Here’s the merry crew of Band-itos

Liz loves a captive audience. Telling colorful tales, she breathes even more life into the best band music ever written. As an ethnomusicologist, she has worked at festivals programming or managing everything from cowboy poets to mule teams to mariachi bands. Besides her obsession with John Philip Sousa and the Yiddish clarinetist, Naftule Brandwein, Liz is an expert gardener and chicken fancier.

Unlike many of my bandmates, I never played in a high school or college band. I started playing clarinet in 2001 and now I’m making up for lost time. I also play with Doc Sprinsock and the SANCApators, the multigenerational KlezKids, and I host a monthly klezmer jam.

Also toots with the Sammamish Symphony. Rumored to be a retired librarian from the University of Washington.

Endowed from birth by nature with twelve incredibly agile fingers, and a love of silly hats – Robert wisely started with clarinet on October 31, 1969 at 15:30. Adding many other instruments over the years, he has played in a passel of bands beginning in junior high. Then there’s folk music with The Fyne Companions, Chanterelle French traditional, the Willy Nilly Shawm Band at renaissance faires, and more. Despite having a day job as a software engineer, he fell in love with the bass clarinet, and threatens to procure a contra bass clarinet…and possibly either a contra alto or a piccolo clarinet. Stand back…

Eben has been playing clarinet since he joined the school band in sixth grade, when his favorite was the Washington Post March. He has played alongside the great and the near-great, including the Flying Karamazov Brothers, the Reverend Chumleigh, and the Royal Famille Du Caniveaux. Besides his day job programming computers, Eben leads Doc Sprinsock and the SANCApators, the house band for Seattle’s circus school SANCA.

Clarinetist by night, dentist by day. I also play in the Greenwood Concert Band and enjoy performing chamber music. I currently study clarinet privately with William Blayney. When not practicing (dentistry or clarinet) I enjoy cooking, running and traveling (and cats).

In addition to her Sousa piccolo duties, Marni plays flute and saxophone in the Fremont Philharmonic for the annual Panto and Moisture Festival at Hale’s, and for contra and English dances with Contra Sutra and various other bands.

Alto sax. A flute player during my youth in Cleveland, I abandoned both 20 years ago and now play alto sax or clarinet whenever and wherever I can.

Utility saxophonist; 175 lbs; bats, right; throws, right; lifetime wrong note average, .269.  After minor league seasoning in the Federal Way Philharmonic, Robertson was brought up to the parent club as a French hornist, though afterbeats soon drove him into the saxophone section.  He recently thrilled his small but indifferent fan club by becoming the first player ever to show up at two concerts having forgotten all or part of his instrument.  Off-field interests include trying to unwrap sticks of butter without tearing the paper.

When I was 8, I thought the French Horn was the most beautiful instrument I had ever seen.  I had no idea that the horn would take me to meeting my future husband on Cape Cod  in the  summer of 1962 and now playing afterbeats in the Ballard Sedentary Sousa Band!

Trumpet player who insanely switched to French Horn a few years ago.  As a native Iowan is convinced that Karl King is the REAL March King (but Sousa is OK too!).

When not playing with the band, he’s often seen acting around the Seattle area and has also been known to produce radio shows. He’s also tech director for the San Francisco’s annual Dance Along Nutcracker.

I started playing in the 3rd grade and remember my logic for choosing the trumpet. My older brother played the violin. I usually followed in his footsteps, but not this time. He was bigger, stronger, and smarter but no way was he going to be louder! So, I played the trumpet (as loud as I could). Twenty years after my last note in college, I opened my case again. The Sousa Band was just getting started and I have been there ever since.

Roy plays trumpet with every kind of band in Seattle.

All around nice guy and kickin’ trumpet player.

It started with trumpet and piano in the 4th grade, then getting the MARCHING BAND BUG in high school and UW Husky Marching Band. Now Husky Alumni Band, hand bells in church, trumpet in the Renton City Jazz Band, mallet percussion in the Renton City Band, keyboards in church, mobile DJ for parties, and elementary general music teacher.

I picked up the trombone in 4th grade and played in bands, orchestras, pit bands and even a Tijuana Brass band.  I put the trombone away for a dozen years, all the while not realizing what the hole was in my life. When the Sousa Band formed in my neighborhood, I joined and have been there ever since. Playing trombone has taught me three important life lessons: 1) the best music happens when everyone works as a team, 2) not having frets, valves or keys, you can play in tune only by listening to others and constantly making fine adjustments, and 3) good lubrication is very, very important.

PJ started his music career as a fourth grade trumpet player. After 6 years of building an overbearing ego, he was rehabilitated as a trombonist. PJ was engulfed in Sousa’s music while participating with his clarinetist father in the Post 47 VFW National Band in his hometown of Uniontown, PA. After moving up to the Penn State Marching Blue Band, he played regularly in front of 100,000 rabid Nittany Lion fans at Beaver Stadium, along with performances at Ohio Stadium, Michigan Stadium, Giants Stadium, the Fiesta Bowl, and Rose Bowl Parade and football game. He is elated to be a part of the Ballard Sedentary Sousa Band, where he never has to worry about playing slow, boring ballads!

Kathy is back in the band on Euphonium after a 20 year break. She’s been a school band director for 37 years. Kathy has played brass and percussion in many ensembles and in her spare time enjoys poetry. She lives with her wife Janelle, cat Cricket and puppy Sparkie. Fun fact – BSSB piccolo player Laura Girardot was her BFF at Arlington (TX) High School!

In-house guest conductor, Eddie is a band director, a scholar of biblical languages, and an avid outdoorsman.

Played trombone through college. Tacet for 40 years. Started playing again 1985 with Seattle Parks “Bring Your Instrument, We Furnish The Rest” program. I started with Ballard Sedentary Sousa Band about 1986 and then joined a bunch of other bands: Seattle Civic Band, The Little Band and the Washington State Letter Carriers’ Band.

Stalwart member of the bottom end, Donn has been in the Sousa Band since the late 1980s, on tuba and various large members of the saxophone family. He plays in other bands, too.

Percussion, Sedentary Baton Twirler and Drill Team Leader. A bassoonist by training, in high school I was drafted into the percussion section during marching band season. I created the Sedentary Twirler in 1987 and have now fulfilled a childhood dream – having a pair of real Majorette Boots of my very own! Previous life – children’s librarian with Sno-Isle Libraries.

Bass drum. Following in the footsteps of the great August Helmecke.

Ray is back where he started – playing Sousa.  He played with the U.S.M.C. 1st Marine Air Wing Band in Iwakuni, Japan. After a couple of years in the North Texas State University Fighting Mean Green Band, Ray hung up his marching drum. After seeing Blast in Dallas on July 4, 2002, gigs followed with Fair Tax Drumline, Shafer Brothers Drumline, Seahawks Blue Thunder, and Sounders FC Sound Wave Band. That’s all fun, but nothing’s like Sousa!

In Memoriam – our past friends. We miss them all.

At the urging of her son, Ian, Julie retrieved her flute from the back of the closet and ventured to a Sousa Band rehearsal. One thing led to another – she got a new flute and played 16th notes a bit faster. Her poems appeared in Limbs of the Pine, Peaks of the Range (Rose Alley Press, Seattle), and a couple of other poems rode Metro buses. 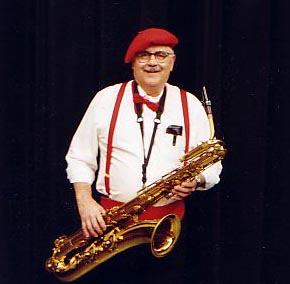 A giant friendly presence of a man, Jan gleefully played every piece in front of him and was passionate about spreading the joy of music. He owned Aurora Music Center in Shoreline and left the physical world in 2000.

Seattle’s Mrs. Folkdance, Alice was a bright star. She inspired everyone who knew her to see just how wonderful everything in life is.

Alice’s husband, Carl, loved to play tympani with us whenever possible. General practitioner, hiker, and a great  admirer of Sousa’s High School Cadets.

Alice was a wicked Dixieland player and originator of funny stories. When the Sousa Band had to walk in Ballard’s 17th of May Parade, Alice drove her car behind us and played her trombone out the window.